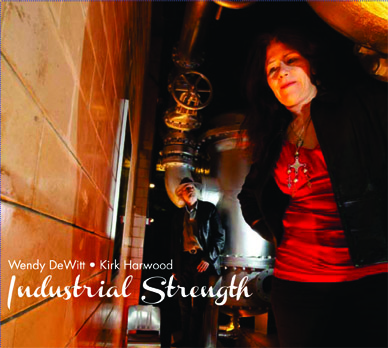 I have not heard much boogie-woogie music lately, and that is a shame because it always puts me in a good mood when I hear piano with a deft left hand hammering out those dancing rhythms. Fortunately, I just got turned on to Industrial Strength, the latest release from Wendy DeWitt and Kirk Harwood (and a few of their friends), which is full of Texas/Chicago boogie-woogie at its best.

Wendy DeWitt, “The Queen of Boogie Woogie,” is from Northern California and supplies the piano expertise and vocals for this project. She has been in the business since the 1980s, both with her own band as well as working with legends such as Otis Rush, Hank Ballard and Sam Moore. Her piano has plenty of Otis Spann and Tommy Thomsen influence, and though I am pretty sure there is more than one self-proclaimed queen of boogie-woogie, with this pedigree Wendy has as much right to sit on the throne as any of them.

Kirk Harwood performs the drumming chores, as well as a few vocals, and also lives in the Bay Area, though he is originally from Chicago. Though he was schooled as a jazz drummer, he has branched out in more rocking ways, having toured with harp legend Norton Buffalo, and playing with Huey Lewis and Roy Rodgers.
Industrial Strength not only shows off Wendy’s piano prowess and vocal chops but also her creativity, as she has provided nine original tracks for this album. The album kicks off with “Nervous,” a good example of a Wendy DeWitt instrumental that is a timeless tune that could have been performed in the 1950s or just yesterday. It sets the tone for the album by displaying her mad piano skills and the perfect interplay between her and Kirk Harwood. There is a similar them on the two cover instrumentals, “Boogie Woogie Stomp” by Albert Ammons and “Bass Key Boogie” from the legendary Eurreal Wilford “Little Brother” Montgomery.

The Gershwin standard “Summertime” comes up next, and this is a version like you have never heard before. It is a fast tempo mash-up that starts with “Flight of the Bumblebee” as the intro before Ms. DeWitt starts her smoky vocals. Nancy Wright (again from the San Francisco area) joins in on the saxophone, and she blows a huge sounding horn. I groaned a little when I saw this song on the CD package, but their fresh take on it blew me away.

Industrial Strength is not entirely high-energy boogie-woogie, and it is sweet that DeWitt and Harwood slow things down and provide heartfelt soul tracks too. “Lucky Old Sun” is performed to a standard that rivals Louis Armstrong’s version, and provides tasteful guitar work from Anthony Paule. Another guitar ace, Steve Freund, can be found filling out “If I Could Just” which is a beautiful original ballad.

A few other notable guest guitarists make appearances on this album. Norton Buffalo alumnus Dave Aguilar also throws in a few licks and tears it up on the straight-up blues tune, “It’s Too Late.” And Wendy’s mentor Tommy Thomsen throws a little swing picking around on “Wings of Love.” This is neat stuff!

The most fun track on Industrial Strength has to be “Love and Appreciation,” which has a bit of everything in it, including a little whistling, some jaunty and clever lyrics, and Marty Eggers on tuba. You don’t get much tuba in today’s popular music, it seems.

After the up tempo instrumental “San Francisco” the album slows to the finish with “Gone” which is a baleful lament of friends who have moved on. Steve Freund comes back for this closer and his guitar provides a great counterpoint to Wendy’s voice. That man has soul oozing out of his fingertips.

Though boogie-woogie may seem like a niche of the blues that not everybody will be able to get into, a lot of creativity and energy has gone into making all of the songs on Industrial Strength unique. It is very accessible, and I think it will appeal to a diverse cross-section of blues and/or piano enthusiasts. Check it out if you get the chance!
Rex Bartholomew ~ Blues Blast